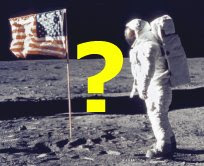 Apollo 11 Landing on the Moon

One of the conspiracy theories that has been around for a long time, and still is going strong, is the landing on the moon story. There are many that feel the video that shows Neil Armstrong taking those steps and planting a USA flag were staged. The reason for this according to the theory? The USA knew they weren’t going to be able to beat the Russians in the quest to be the first to land on the moon.

The evidence that is claimed to have against the USA government with this is very interesting. For example, in the video of what was aired on TV, astronauts Armstrong and Aldrin are standing by the flag that was planted. It is moving, and for that to occur, there would need to be a wind source. However, there isn’t air on the atmosphere of the moon, so the possibility of a wind source isn’t there.

According to NASA, the rippling that is seen is due to the way the USA flag was packed in a tube. It was simply the materials getting back to their original shape once the flag was unfolded and displayed.

The next element of proof that is in question is the ground around the area where the space shuttle was to have landed on the moon. According to experts, there should be a blast crater underneath that shows where it landed. However, the videos and photos don’t show any such crater.

This gives those that believe in a conspiracy theory the idea that the space shuttle was merely a prop that was placed in the field for the photos and videos to be taken. The explanation from NASA is that it is due to the low gravity elements of the moon.

It is a fact that the sun is the only source of light on the moon. That means any shadows would have to be parallel to each other. However, in many of the photos and videos, there are shadows in all directions.

According to the conspiracy theory, this is proof that the photos and videos where taken at a location that offers multiple sources of lighting rather than actually being from the moon. NASA blames the lighting differences on uneven areas of the moon surface.

Were those pictures and photos taken from a photo shoot location? Conspiracy theory believers want to know what the object is that is above the helmets of the astronauts in various photos and videos. Upon being enhanced, they do seem to look like a rope or a wire.

Where are the stars? That is what many conspiracy theory believers about the USA landing on the moon would like to know. The stars are significant visible from the moon and very bright because there aren’t any clouds to cover them. Yet you can’t see a single star in any of the videos or the photos.

According to NASA, the quality of the photos simply left the appearance of the stars washed out. Those that believe this conspiracy theory think that NASA knew they couldn’t fake well enough the mapping of the stars so they left them out of the equation.

Some of the photos that are said to have been taken by the astronauts on the moon have the same exact background! However, they are said to be taken miles and hours apart. It isn’t possible according to those that believe the conspiracy theory. They believe that NASA used a background in a controlled environment to take these photos.

Experts have been interested in either proving or disproving the conspiracy theory relating to the moon. One way to do that they felt was to examine and test the rocks that were brought back from the moon. They would be able to find out if they were real or not.

The problem? Those rocks can’t be found! According to NASA, they disappeared and they haven’t been able to find out where they are. This only further fuels the fire that there is plenty being hidden that they don’t want to be uncovered. Perhaps one day we will know one way or the other for sure about this!

What is interesting about this conspiracy theory is that it is more likely to be followed by younger generations. Perhaps they are scrutinizing the materials too closely, based on the quality of technology they are used to in today’s society.

Older generations, especially those that watched the live TV viewing of the information shared, tend to take it at face value. They feel it is part of their history and they still remember the excitement of seeing it all unfold right before their eyes.

Here is a link to a very good video to watch about the conspiracy theory relating to the USA landing on the moon: